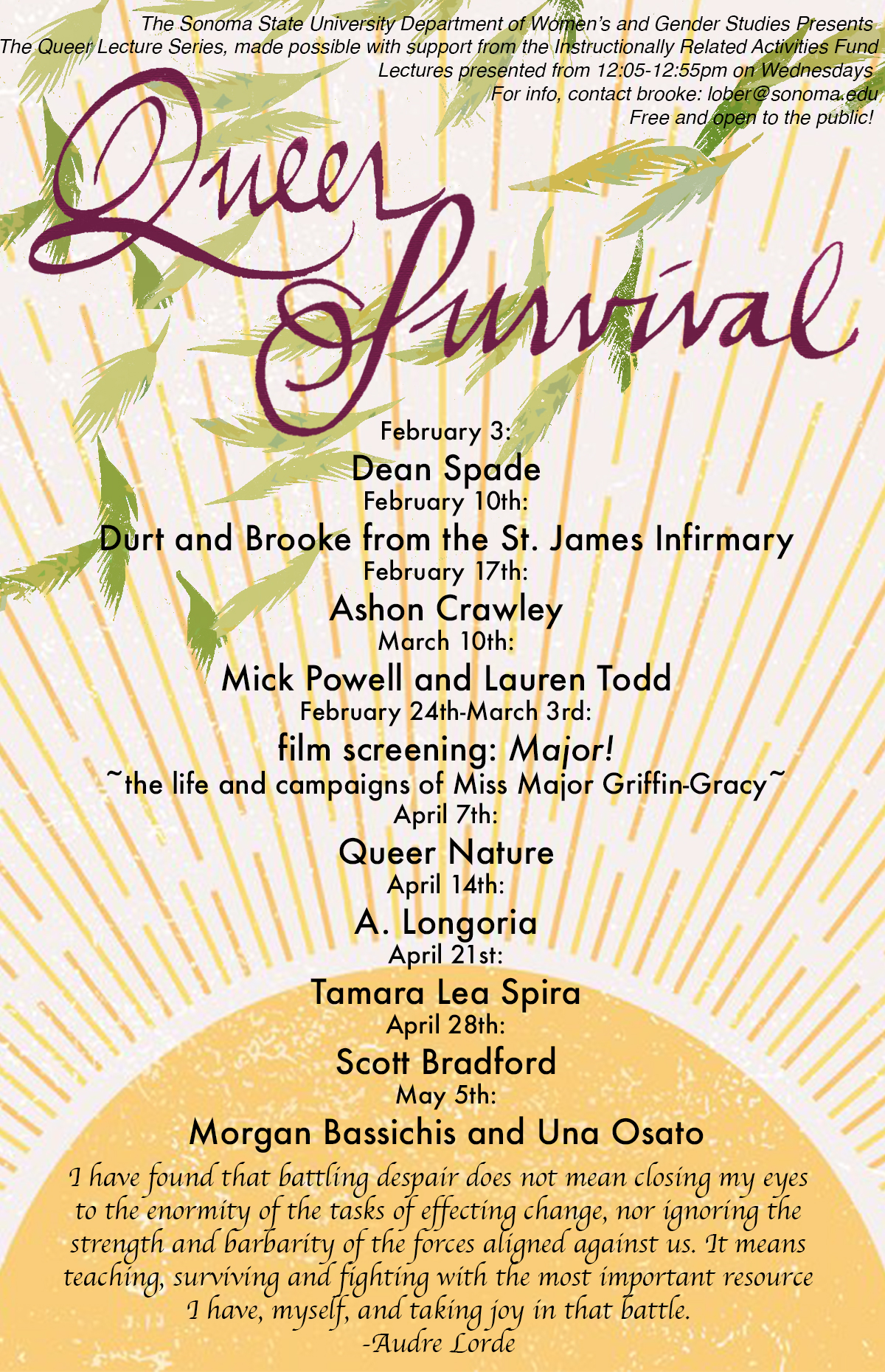 Presented by the Women's and Gender Studies Department
Mondays, 12:05-12:55pm, Ives 101
All Lectures Free and Open to All

Escavedo, a Sonoma State WGS and Queer Studies minor alumni, is HIV Services coordinator at St. James Infirmary, a San Francisc-based peer-run clinic for sex workers. He is also a punk musician and drag performer "Kochina Rude." He will talk about how juggling these multiple identities allows him to craft a queer life and engage in queer of color cultural worldmaking.

February 10 - Sara Beth Brooks, What Does the A in LGBTQIA+ Stand For?

Scholar-activist, veteran community organizer, and founder of Asexual Awareness Week Sara Beth Brooks explors asexuality and the asexual community. Over the last 20 years, asexual communities have organized together both online and in person across the globe and developed a unique vocabulary to describe their experiences. This presentation will introduce the asexual umbrella of identities, the violence faced by asexual folks, the history of the asexual movement, coming out as asexual, and navigating mixed orientation relationships. Brooks, who identifies as both bisexual and asexual, has also been involved in the fight to secure marriage equality, military service, and employment for LGBTQIA+ communities. In 2013, she was honored with the National Voice and Action Award by Campus Pride. Twice she was a guest of the Obama White House to discuss LGBTQIA+ issues.

Haefele-Thomas is the author of Introduction to Transgender Studies (2019), which is the first introductory book to the field of study in the world. They will be exploring the work and lasting effects of two 19th-century trans social justice advocates: Dr. James Miranda Barry and Frances Thompson. Barry was a groundbreaking British medical reformer in South Africa who navigated the "public secret" of his gender history. Frances Thompson, a freed slave, was part of a group of African American women who stood up against violence done to her and her community in South Memphis Tennessee. Haefele-Thomas is also the co-author with Aaron Devor of Transgender: A Reference Book (2019) and chairs the LGBT Studies Department at City College of San Francisco. They are also training to compete in the non-binary trans category at the LGBT International Powerlifting Competition held annually in Blackpool, England.

Zamora, a proud queer Latina feminista educator and alumni of the SSU WGS major and Queer Studies minor, will enact her performance autoethnography that draws from Gloria Anzaldúa’s Borderlands: La Frontera to explore the relationship between colonialism, racism, sexism, and biphobia. Participants are asked to reimagine how the bisexual borderlands act as not only spaces of cultural contradictions, but serve as sites of brilliance, resistance, and survival. As a coordinator for the CSU Monterey Bay Otter Cross-Cultural Center, Bianca utilizes intersectional and arts-based approaches to explore issues of power, identities, and coalition building. Outside of work, she engages in community advocacy through poetry. Most recently Bianca spoke at the 2019 Monterey Peninsula Pride and will be speaking at the 2020 Womxn's March. She holds a Student Affairs Master’s degree from Miami University.

Marcus, an out bisexual lawyer, will address the importance of bi+ inclusion in LGBTQ rights advocacy while also addressing the reciprocal problem and harms of bi+ erasures in LGBTQ law and policy work. Bisexuals’ time for meaningful inclusion in LGBTQ-rights discourse and advocacy is both long-overdue and essential to the protection of liberty for all LGBTQ people. She is the “Legally Bi” columnist for bi.org; co-founder of BiLaw, the national legal organization; author of numeous articles on LGBTQ rights, bisexual jurisprudence, constitutional law, racial justice, and other issues; and has held a number of leadership positions in the LGBTQ movement. She grew up in Memphis, where she rejected efforts to turn her into a southern belle.

March 9 - Shad Reinstein and Tina Dungan,  The Queering of Sonoma: From LG to LGBTQI

Sonoma County LGBTQI History Timeline creators Tina Dungan and Shad Reinstein will show how Sonoma has always had an LGBTQI presence and has played a significant role in queer culture and politics. What was happening here in the years before the 1969 Stonewall Riots in New York? What did gender nonconformity look like here during the 1970s and 80s? How did Sonoma County help stop a national anti-LGBTQ movement? How did one person start the intersex movement here? The Sonoma County LGBTQI Timeline has displayed at Sonoma County Pride and Sonoma State University. Dungan is a life-long resident of Sonoma County who came out as a lesbian during the early 1970s through her involvement in the first Women’s Studies program at SSU. Since 2007, she has been working with others through Lesbian Archives of Sonoma County to capture the cultural and political history of that community. Reinstein, who came out shortly after Stonewall, has been involved since then in LGBTQI culture and politics, and as a documentary filmmaker, she now produces OUTwatch, Wine Country’s LGBTQI Film Festival.

Koskovich, a historian, curator and rare book dealer, will assert that stories tied to historic places have long served to reflect the power of the state and restrict social belonging. Historic place-making has traditionally erased LGBTQ heritage, just as LGBTQ people themselves have been marginalized throughout much of American history. This talk will offer a critical look at the function of historic sites and trace organizing in San Francisco over the past four decades to transform place-based history into a tool for publicly commemorating the LGBTQ past and for honoring LGBTQ people in the present. Koskovich, a founding member of the GLBT Historical Society, has been active for nearly four decades in the movement to create LGBTQ archives and museums and has presented and published widely in English and French, most recently with a focus on the history of queer history as a cultural practice and heritage effort in the United States. In 2014–2016, he was one of 15 historians invited by the U.S. National Park Service to advise on improving representation of the LGBTQ past in federal heritage programs.

Blaque is an animator, illustrator and Youtuber from Southern California who has been blogging about her life for the past 10+ years on YouTube. Experiencing the ups and downs of new media, she has ultimately concluded that social media is a powerful force for change and awareness. She currently uses her platforms on YouTube (114k subscribers) and Facebook (180k with an average weekly reach of 4,000,000 people) to speak about the topics she’s passionate about as well as spread information, and cultivate conversations that encourage education across intersections. She playfully refers to herself as “intersectionality salad”as she embodies various identities and experiences. As a woman and survivor of rape and sexual assault, she is passionate about fostering conversations where survivors have a voice. As an outspoken feminist, she’s often on the receiving end of online harassment. As a black woman, she is invested in starting conversations about white supremacy. As a Trans woman, she believes that speaking about her growth and acceptance of self is vital in a world where trans people aren’t seen as valid.

April 13 - Dr. Eric Gonzaba, Where Do They Go? Race, Racism, and the History of the Black Gay Bar

Dr. Gonzaba, a historian of African American and LGBT culture and an Assistant Professor of American Studies at California State University, Fullerton, explores how race helped define gay nightlife since the 1960s. He examines the birth and proliferation of separate queer spaces for people of color, especially African Americans, as a result of continued discrimination even in so called progressive gay circles.  Black loyalties to bars that catered to black clientele represented a form of resistance to discriminatory clubs or bars that neglected black gay customers. Many African American gay men utilized and overcame this segregated nightlife scene to remake their gay lives on their own terms, away from white eyes and scrutiny. Dr. Gonzaba received his doctorate in American History from George Mason University in 2019. In 2014, he founded Wearing Gay History, an award-winning online digital archive and museum that explore global LGBT history through t-shirt. He’s currently completing a book on the culture and politics of gay nightlife in Washington, D.C., Baltimore, and Philadelphia since 1970.

April 20 - Martin Rawlings-Fein, Beyond David and Jonathan: Bisexual Representation in the TaNaKh

Rawlings-Fein, a graduate of the Davvenen' Leadership Training Institute with an advanced degree in Jewish Studies from the Graduate Theological Union, asks, was King David a bisexual? Given the narrative nature of biblical readings, the eroticism of David's relationship with Jonathan, and passionate relationships with women, this talk will explore this interpretation. Rawlings-Fein is a Jewish, bisexual, transgender father of two, filmmaker & educator. From conferences in the San Francisco Bay Area to the White House, Rawlings-Fein speaks and writes about the topics of EdTech in education, gender & sexuality in Judaism, and pedestrian safety in the San Francisco Bay Area. He is also the director of many short films, including tshorts, Perfect Fit (2009), Gillian (2010), Clocked: An Oral History (2009), Who You Callin' Queer? (2010), and Choosing to be Chosen (2019). He is also the former headteacher & education director at the Beit Sefer Phyllis Mintzer school in San Francisco.

Dr. Jolivétte, professor and senior specialist in Native American and Indigenous Studies in the Department of Ethnic Studies at the University of California, San Diego, will examine the ways in which queer Indigenous peoples across the United States, Australia, Canada and Latin America enact various forms of kinship and cultural self determination to combat settler violence, anti-Blackness, and Western notions of citizenship and queerness by documenting queer Indigenous thrivance. Dr. Jolivétte, the former tribal historian for the Atakapa-Ishak Nation, is an internationally recognized researcher, educator, writer/poet, speaker, socio-cultural critic, and an aspiring chef. Born and raised in San Francisco, Jolivette is a Creole of Opelousa, Atakapa-Ishak, French, African, Irish, Italian, and Spanish descent. As a national speaker he has connected with thousands of college students, educators, government employees and private and non-profit sector organizations over the past decade across the United States, Canada, the Netherlands and Australia.